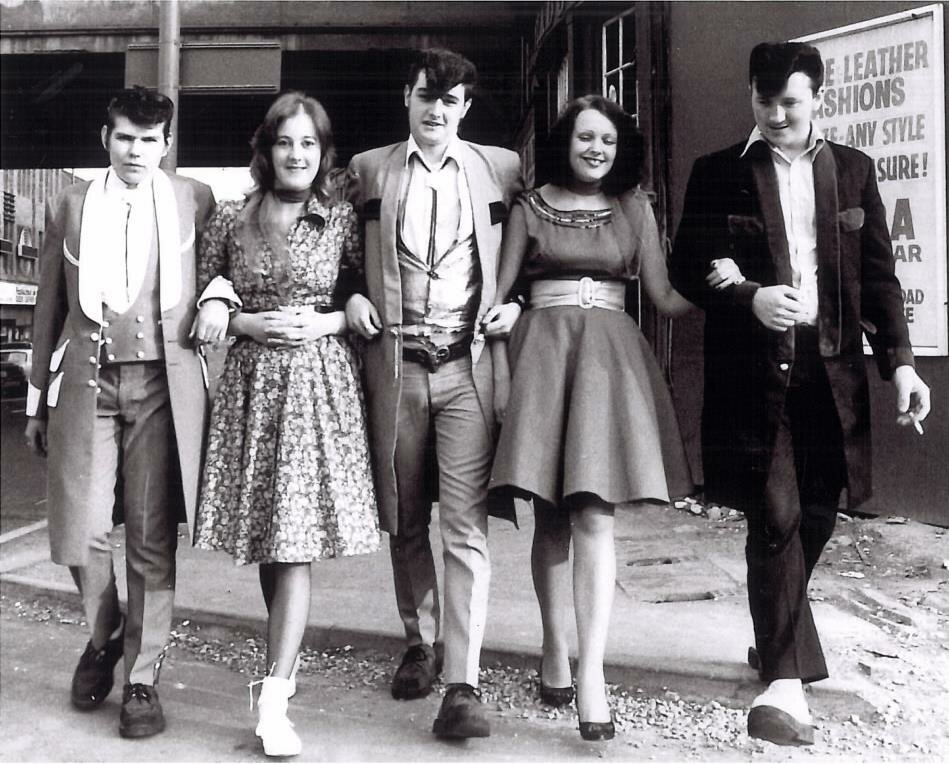 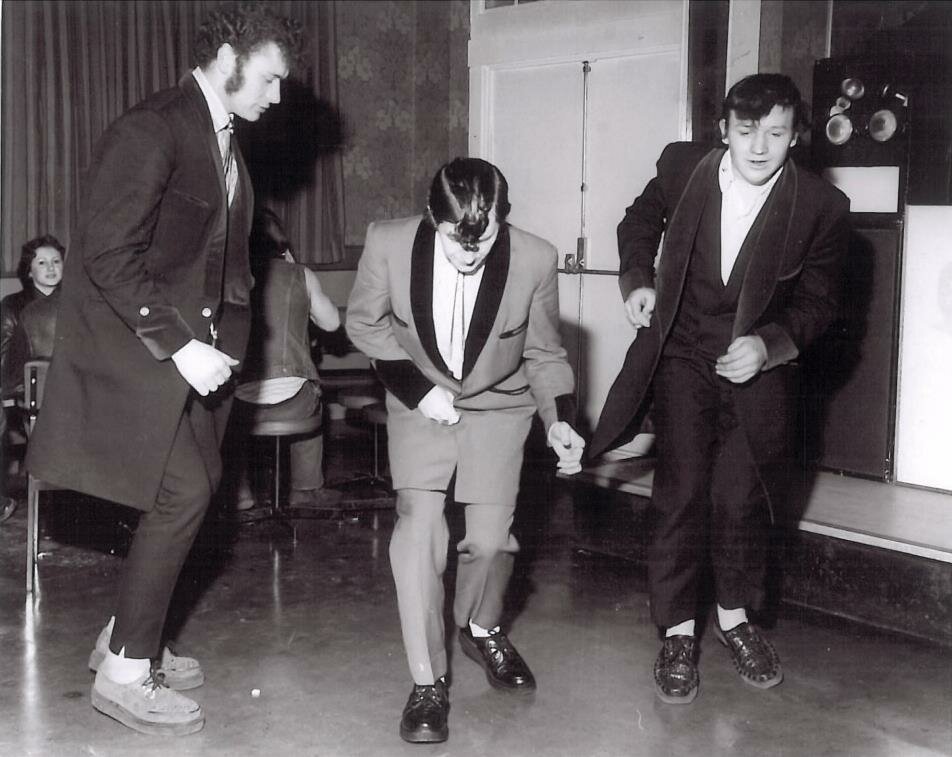 Yorkshire Evening Post, Leeds, 28th March 1974 Teddy boys bopping on the dance floor at the Wykebeck Arms. . . . from the left are Dennis Peace 22 of Dewsbury Road; Martin Gibbs 19 , of Halton, and Laddy Whitaker 18 of Armley. 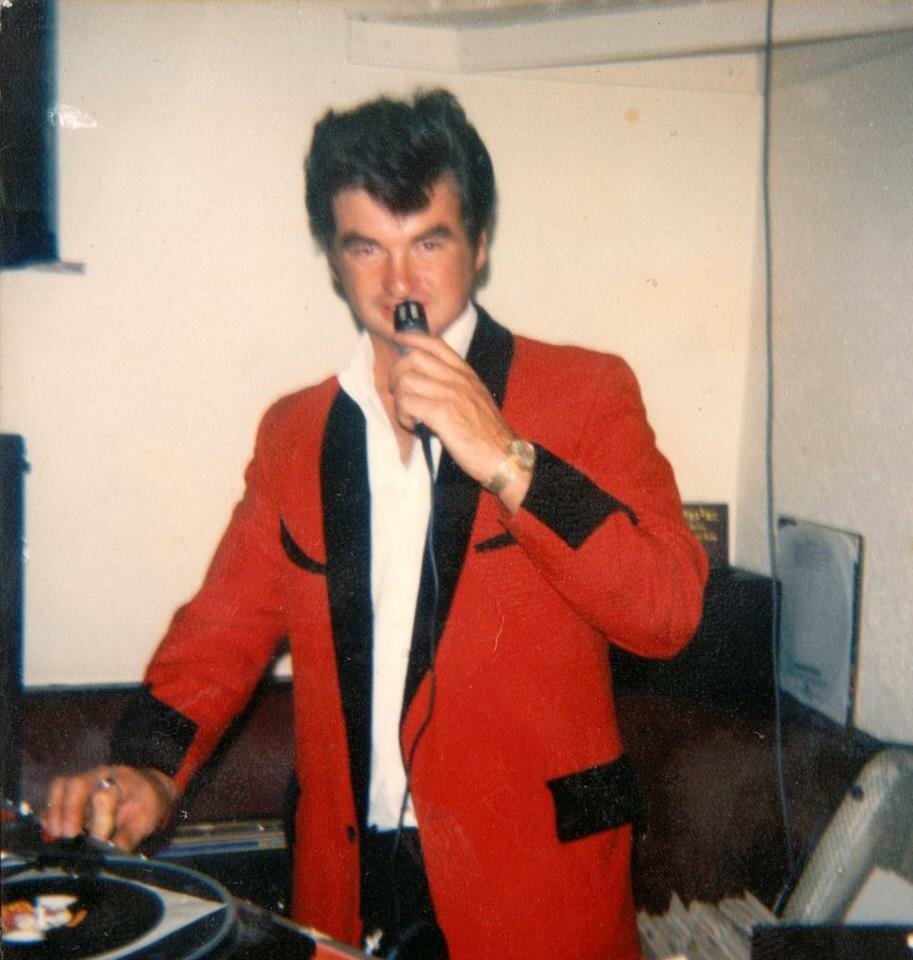 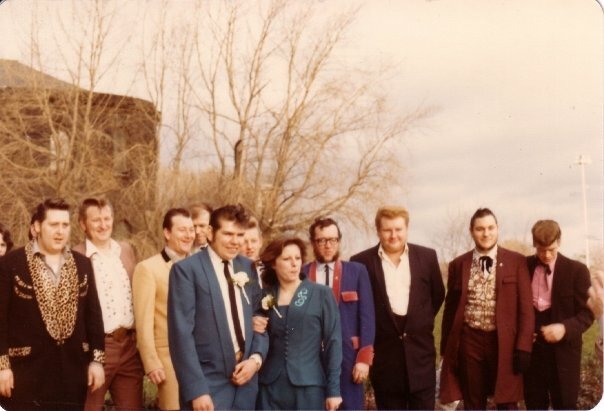 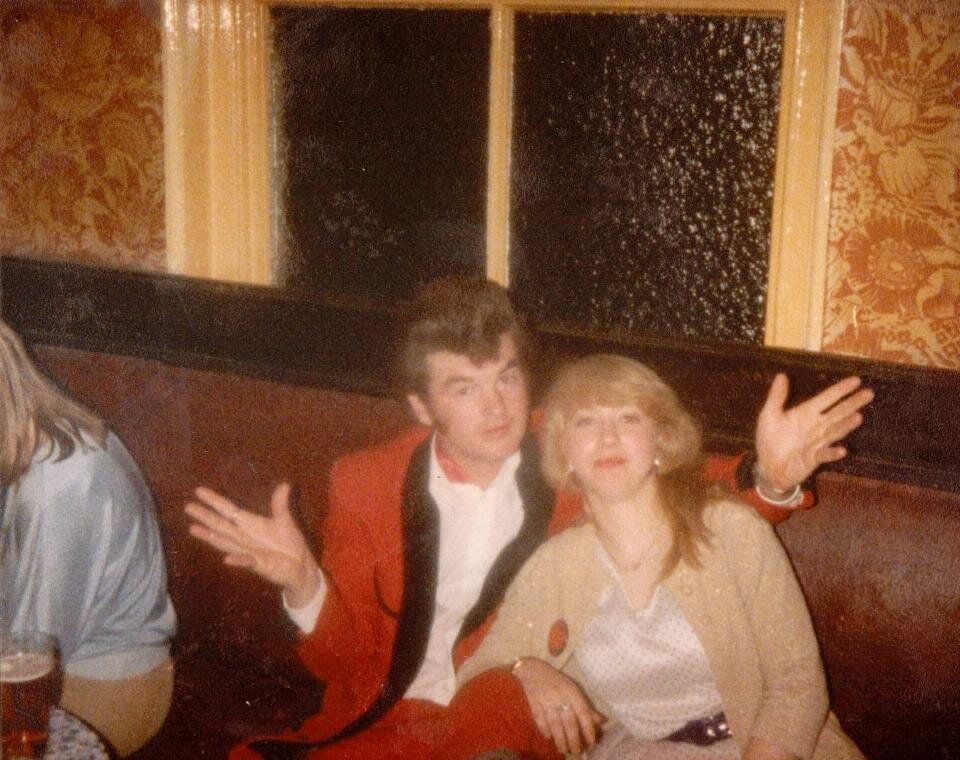 Nidge with Tracy Cox at the Whip Pub, Duncan street, Leeds in 1980. 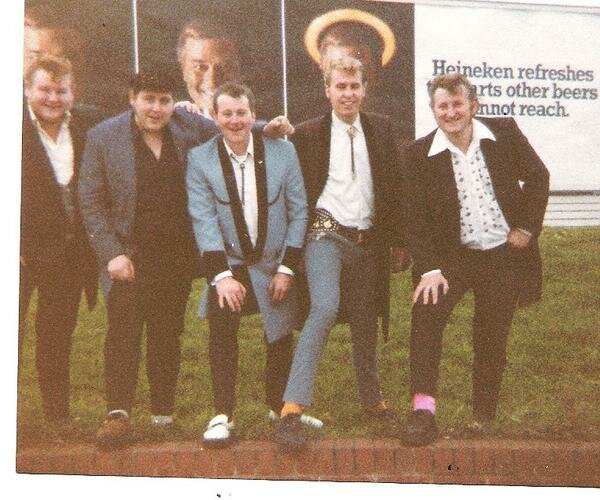 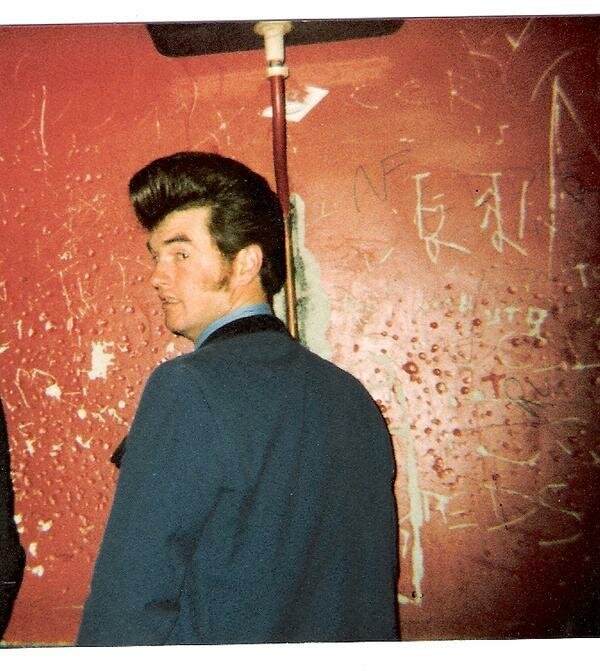 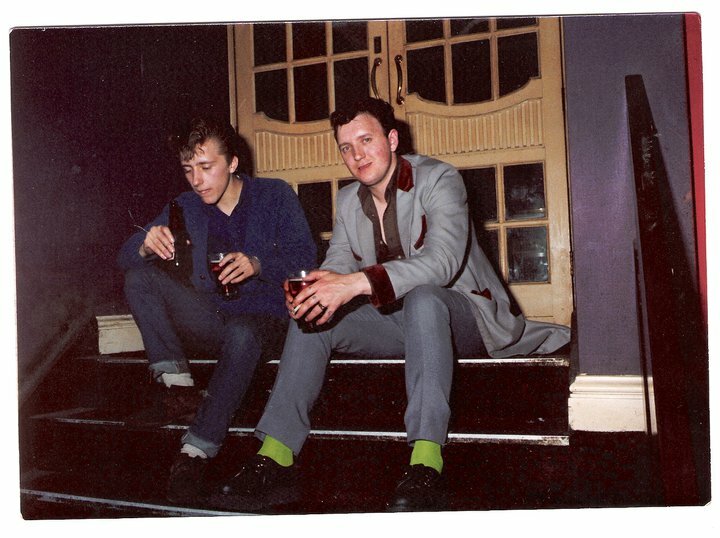 Steve Hickey and Terry Best at The Gaiety, late 1970's. 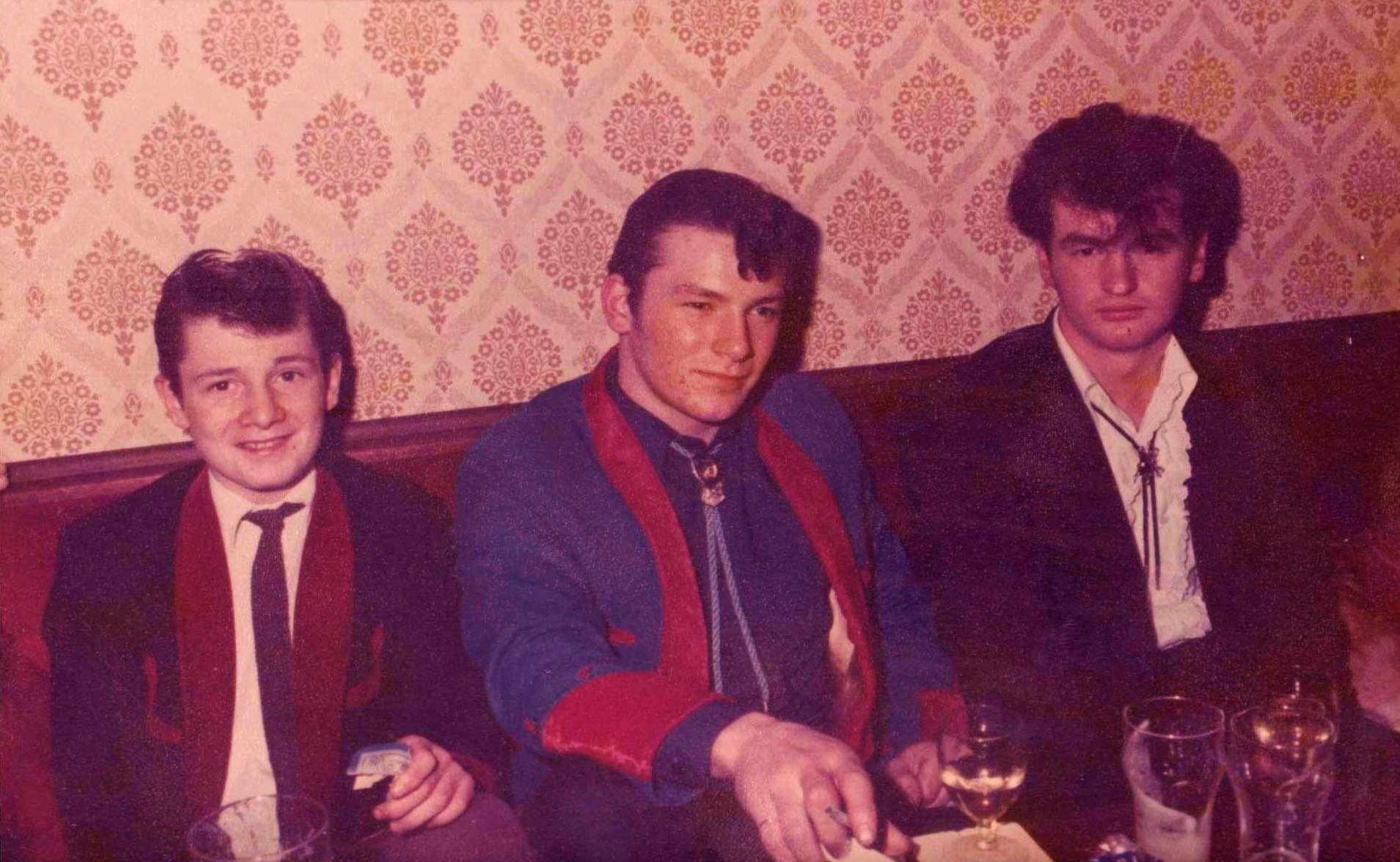 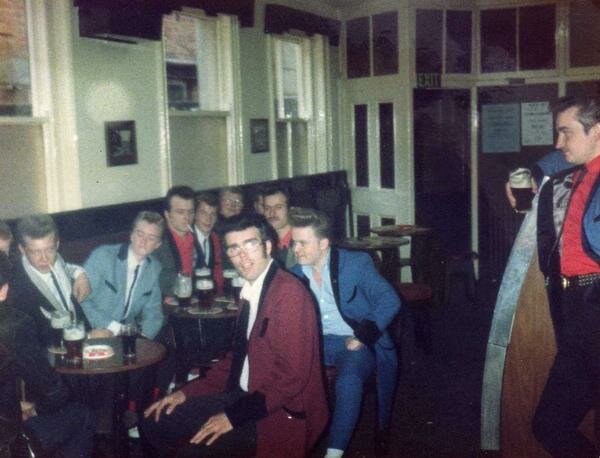 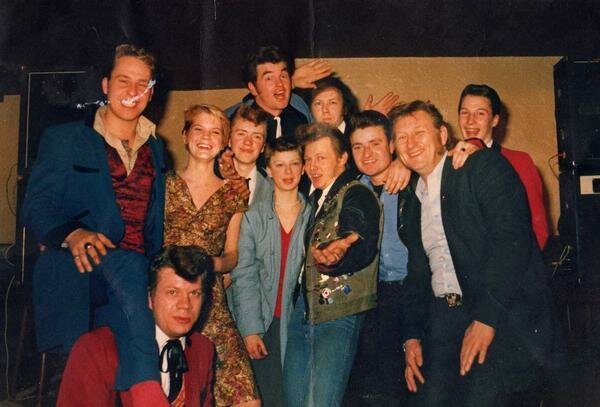 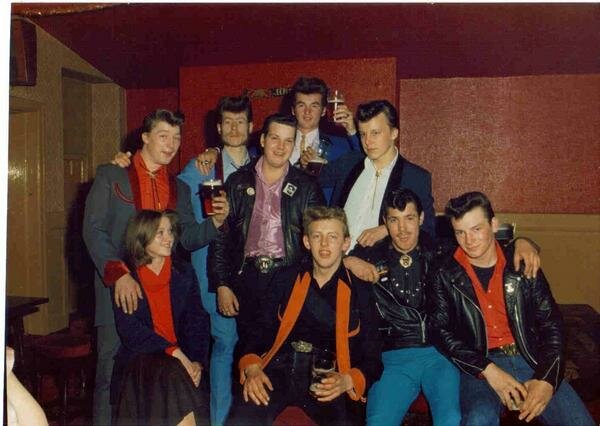 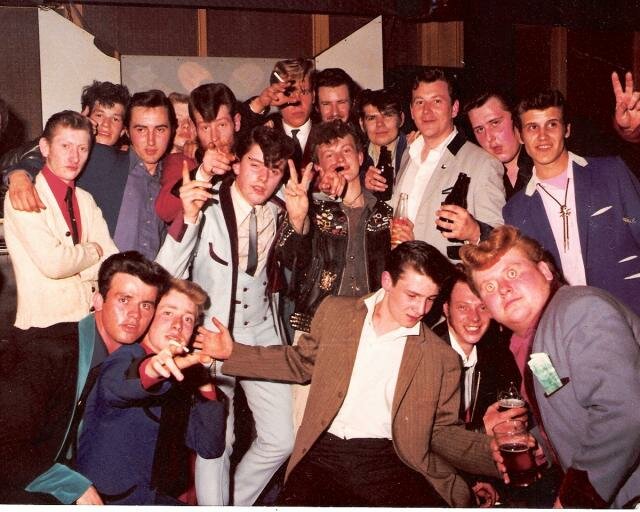 Nidge,  Jimmy Fletcher with Wolf at the White Swan 1970s. 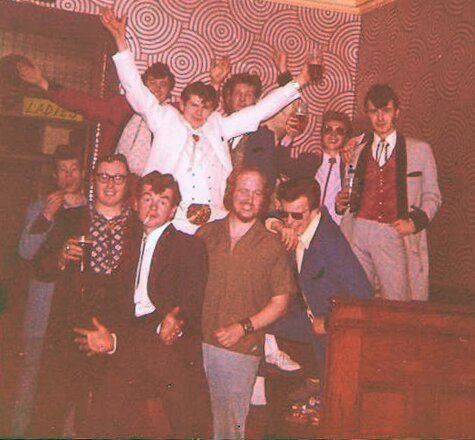 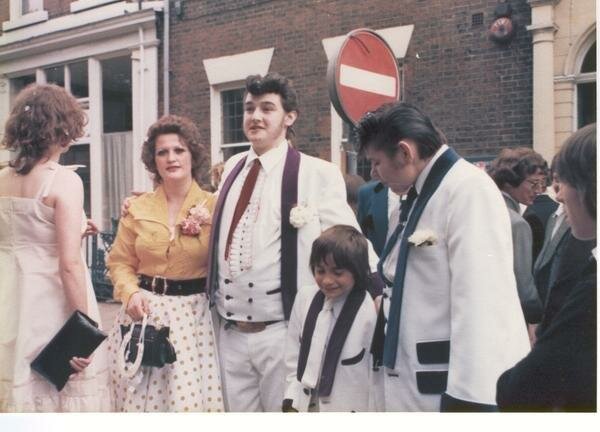 Maggie and Nik's Wedding with Henry. 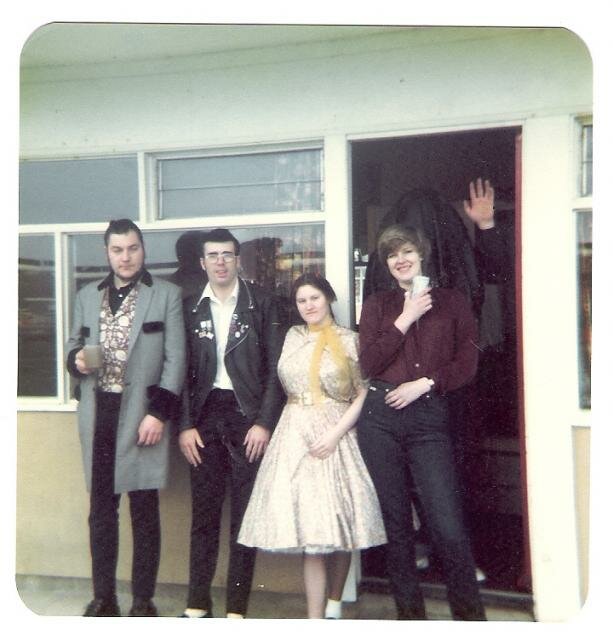 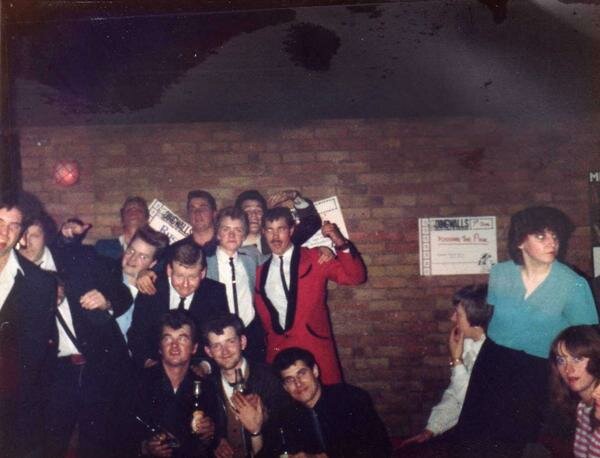 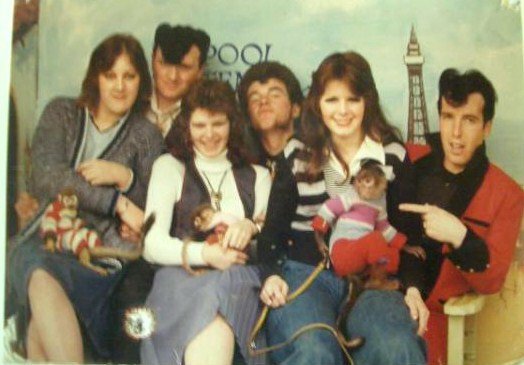 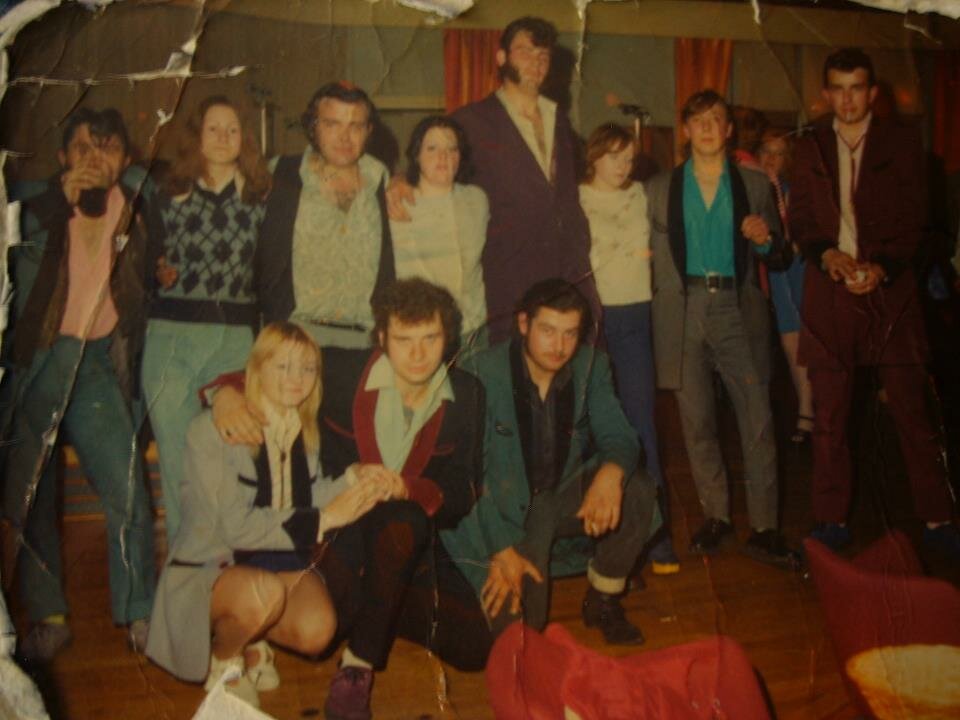 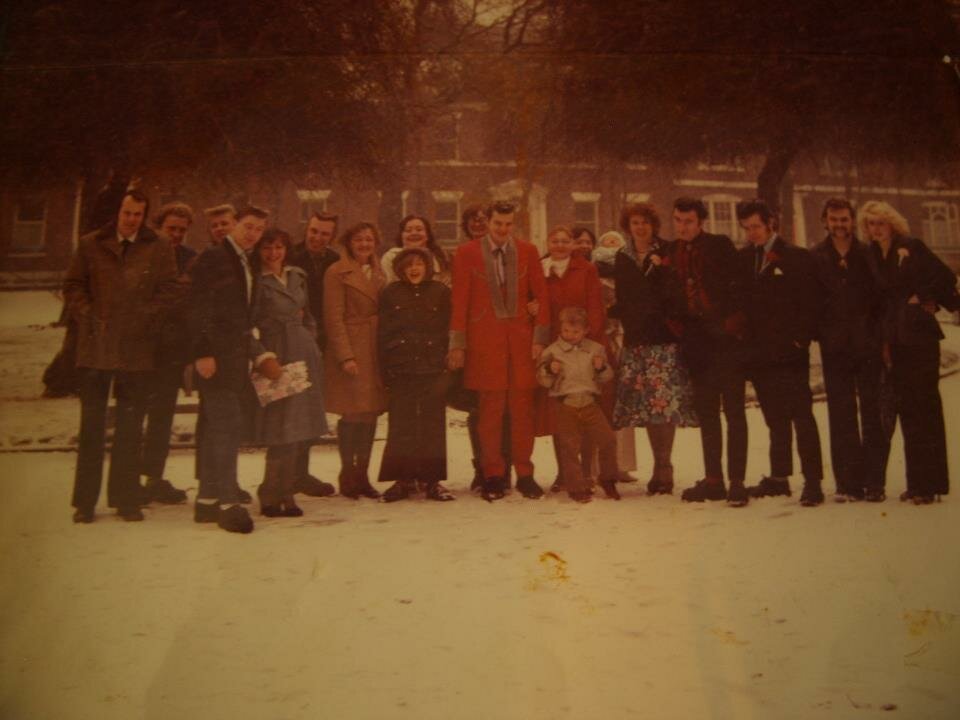 Lynda Gedge from Horsforth near Leeds with Dave Cass from Doncaster circa 1975. Dave sadly died at the very young age of 27 - R.I.P. 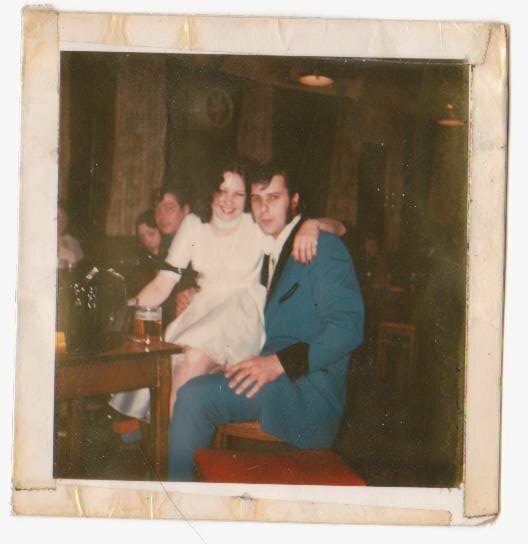 Those were the days at the 'Black Bull, Doncaster in 1975 with Lynda Gedge and Dave Cass. 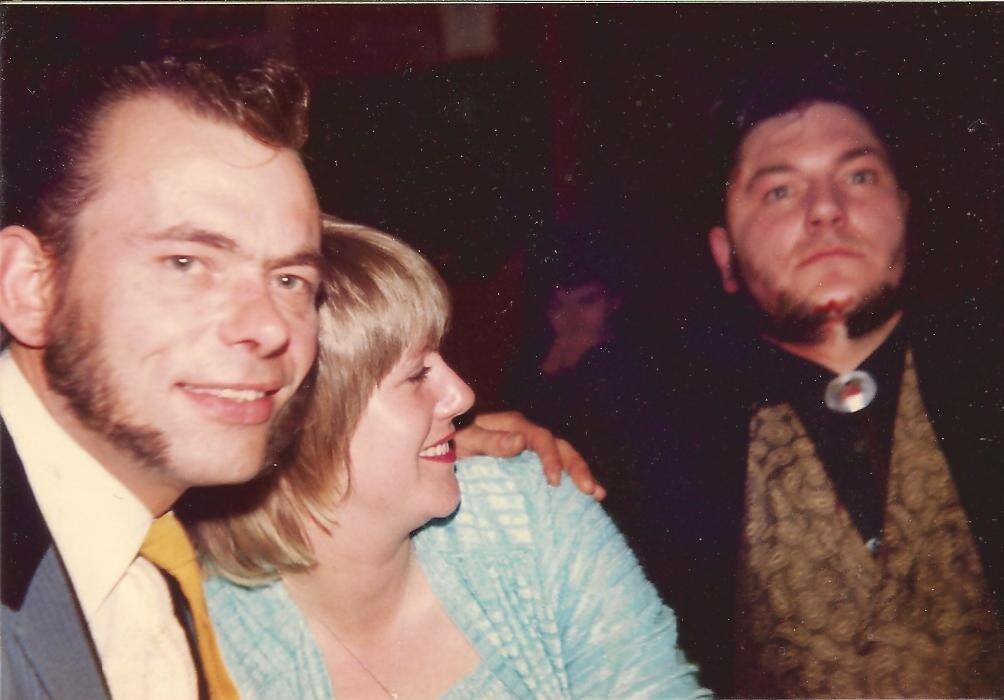 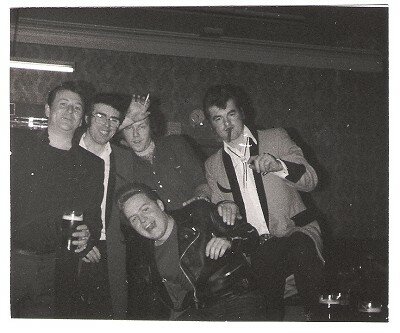 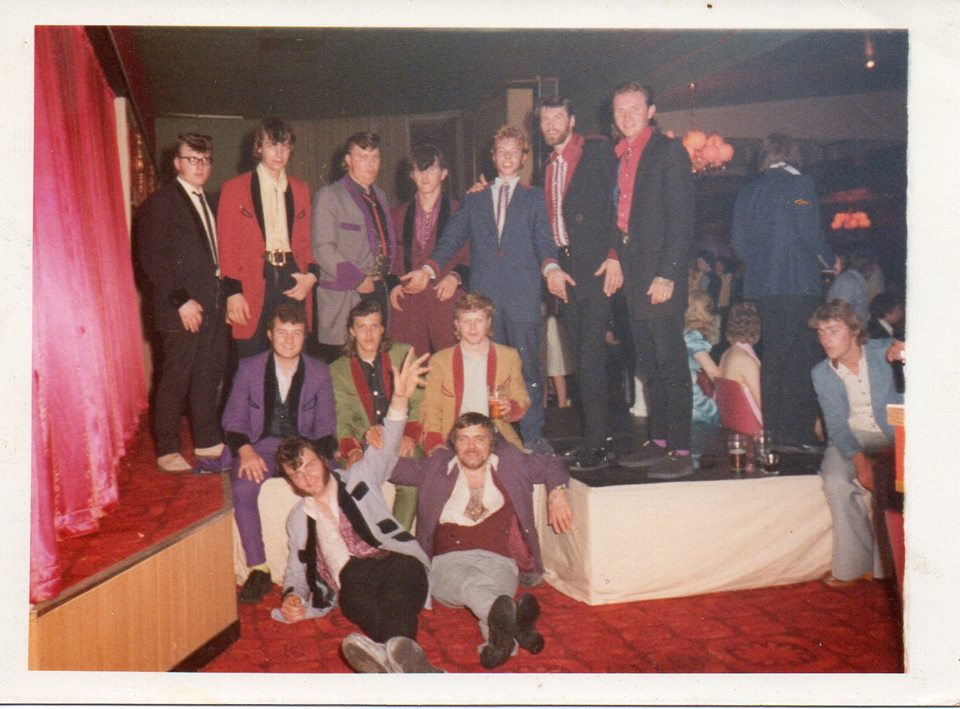 Teddy Boy Roy "Rocky Townes" photographed at Armley, Leeds in 1958, in an iconic squared bottomed rolled / shawled collar drape jacket.  Although the Drape Jacket has slanted jetted pockets, the style of this Drape became very popular amongst the Leeds Teds of the 1970's.  Big Gerry Townes who was Roy's younger brother (see previous photograph taken in 1973) was the obvious influence who can be seeing wearing the same style of Drape.  the main difference was that the 1970's Leeds Teds would have velvet on their collars, cuffs and pockets. 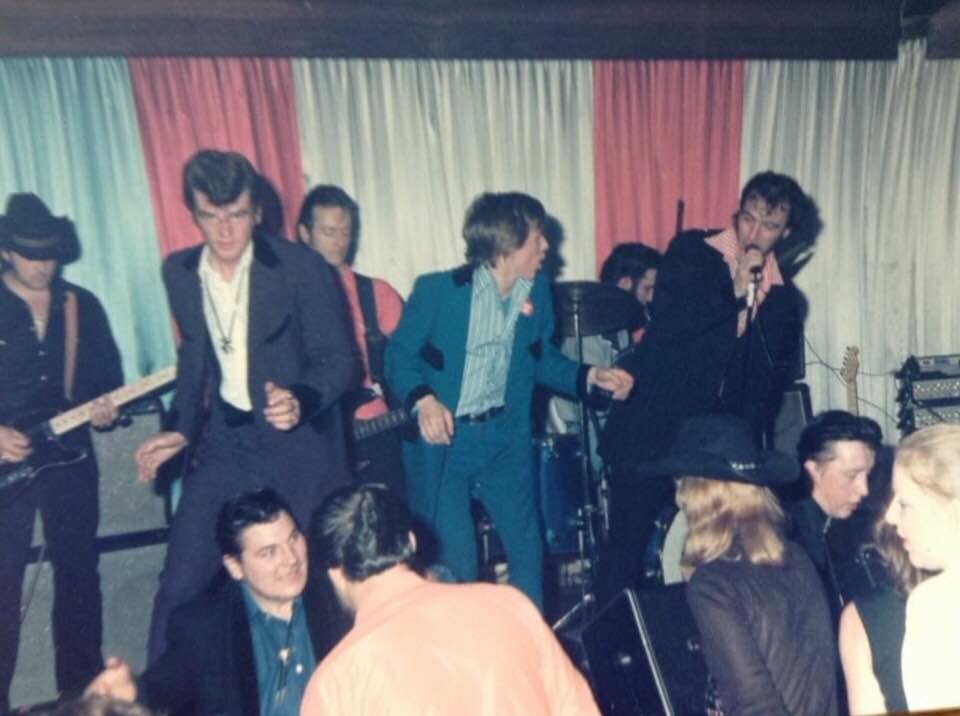 Seventies on stage, Nidge with Cavan and Steve Hicky with Myles and Josephine Parsisson (now Josie Coote) dancin. According to David Williamson (the curtains are the give-away!) this photograph was taken at the East Ward Conservative Club, Long Close Lane, Richmond Hill, Leeds 9.