NOW Scotland yard has ordered a full report on what goes on in the remarkable world of the ...

Could our son be tempted to join the Teddy Boys?

That's the question troubling most families in Britain.

(And answered in this special ILLUSTRATED investigation). 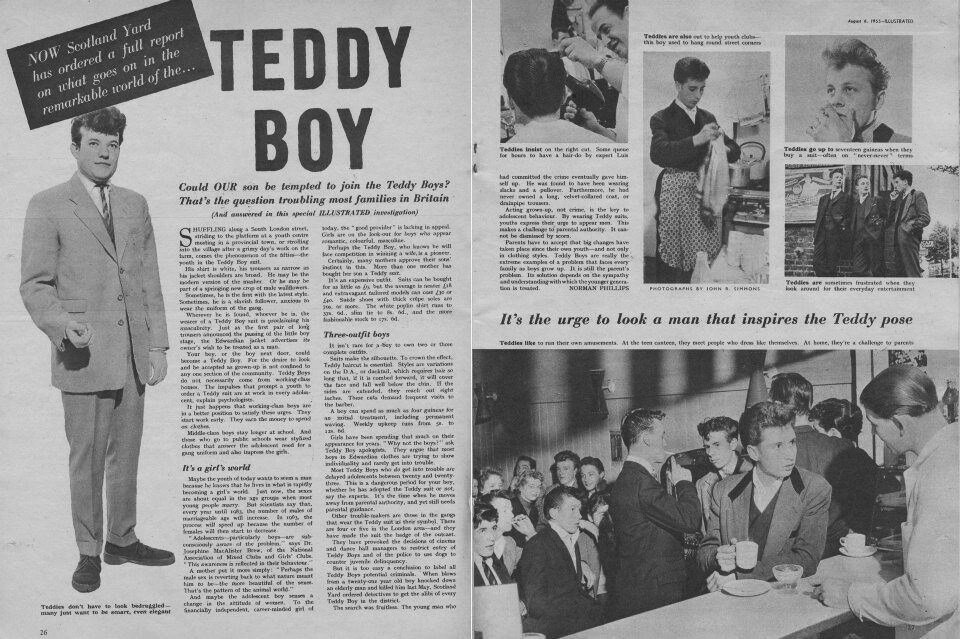 SHUFFLING along a South London street, striding to the platform at a youth centre meeting in a provincial town, or strolling into the village after a grimy day's work on the farm, comes the phenomenon of the fifties - the youth in the Teddy Boy suit.

His shirt is white, his trousers as narrow as his jacket shoulders are broad.  He may be the modern version of the masher. Or he may be part of a springing new crop of male wallflowers. Sometimes he is the first with the latest style.  Sometimes he is a slavish follower, anxious to wear the uniform of the gang.

Wherever he is found, whoever he is, the wearer of the Teddy Boy suit is proclaiming his masculinity.  Just as the first pair of long trousers announced the little boy stage, the Edwardian jacket advertises its owner's wish to be treated as a man.

Your boy, or the boy next door, could become a Teddy Boy.  For the desire to look and be accepted as grown-up is not confined to any one section of the community.  Teddy Boys do not necessarily come from working-class homes. The impulses that prompt a youth to order a Teddy suit are at work in every adolescent, explain psychologists.

It just happens that working-class boys are in a better position to satisfy these urges.  They start work early. They earn the money to spend on clothes.

Middle-class boys stay longer at home.  And those who go to public schools wear stylized clothes that answer the adolescent need for a gang uniform and also impress the girls.

It's a girl's world

Maybe the youth of today wants to seem a man because he knows that he lives in what is rapidly becoming a girl's world. Just now, the sexes are about equal in the age groups when most young people marry. But scientists say that, every year until 1983, the number of females will then start to decrease.

"This awareness is reflected in their behaviour."

A mother put it more simply: "Perhaps the male sex is reverting back to what nature meant him to be-the more beautiful of the sexes. That's the pattern of the animal world."

And maybe the adolescent boy senses a change in attitude of women. To the financially independent, career-minded girl of today, the "good provider" is lacking in appeal. Girls are on the look-out for boys who appear romantic, colourful, masculine.

Perhaps the Teddy Boy, who knows he will face competition in winning a wife, is a pioneer.

Certainly, many mothers approve their sons' instinct in this. More than one mother has bought her son a Teddy suit.

It's an expensive outfit. Suits can be bought for as little as £9, but the average is nearer £18 and extravagant tailored models can cost £30 or £40. Suede shoes with thick crepe soles are 70s. or more. The white poplin shirt runs to 37s. 6d., Slim Jim tie to 8s. 6d., and the more fashionable stock to 17s 6d.

It isn't rare for a boy to own two or three complete outfits.

Suits make the silhouette. To crown the effect, Teddy haircut is essential. Styles are variations on the D.A., or ducktail, which requires hair so long that, if it is combed forward, it will cover the face and fall well below the chin. If the sides are extended, they reach out eight inches. These cuts demand frequent visits to the barber.

A boy can spend as much as four guineas for an initial treatment, including permanent waving. Weekly upkeep runs from 5s. to 12s. 6d.

Girls have been spending that much on their appearance for years. "Why not the boys?" ask Teddy Boy apologists. They argue that most boys in Edwardian clothes are trying to show individuality and rarely get into trouble.

Most Teddy Boys who do get into trouble are delayed adolescents between twenty and twenty three. This sis a dangerous period for your boy, whether he has adopted the Teddy suit or not, say the experts. It's the time when he moves away from parental authority, and yet still needs parental guidance.

Other trouble-makers are those in the gangs that wear the Teddy suit as their symbol. There are four or five in the London area - and they have made the suit the badge of the outcast.

They have provoked the decisions of cinema and dance hall managers to restrict entry of Teddy boys and the police to use dogs to counter juvenile delinquency.

But it is too easy a conclusion to label all Teddy Boys potential criminals. When blows from a twenty-one year old boy knocked down an elderly man and killed him last may, Scotland Yard ordered detectives to get the alibi of every Teddy Boy in the district.

The search was fruitless. The young man who had committed the crime eventually gave himself up. He was found to have been wearing slacks and a pullover. Furthermore, he had never owned a long, velvet collared coat, or drainpipe trousers.

Acting grown-up, not a crime, is the key to adolescent behaviour. By wearing Teddy suits, youths express their urge to appear men. This makes a challenge to parental authority. It cannot be dismissed by scorn.

Parents have to accept that big changes have taken place since their own youth - and not only in clothing styles. Teddy Boys are really the extreme examples of a problem that faces every family as boys grow up. It is still the parent's problem. Its solution depends on the sympathy and understanding with which the younger generation is treated.

1.    1.Teddies don't have to look bedraggled - many just want to be smart, even elegant. (p26 Large Photograph) 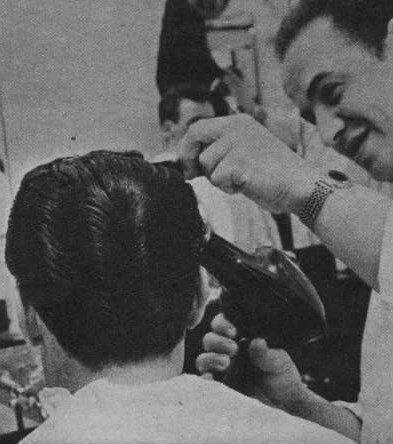 2. Teddies insist on the right cut.  Some queue for hours to have a hair-do by expert Luis (all p 27)

Teddies are also out to help youth clubs - this boy used to hang round street corners.

Teddies like to run their own amusements.  At the teen canteen, they meet people who dress like themselves.  At home they are a challenge to parents 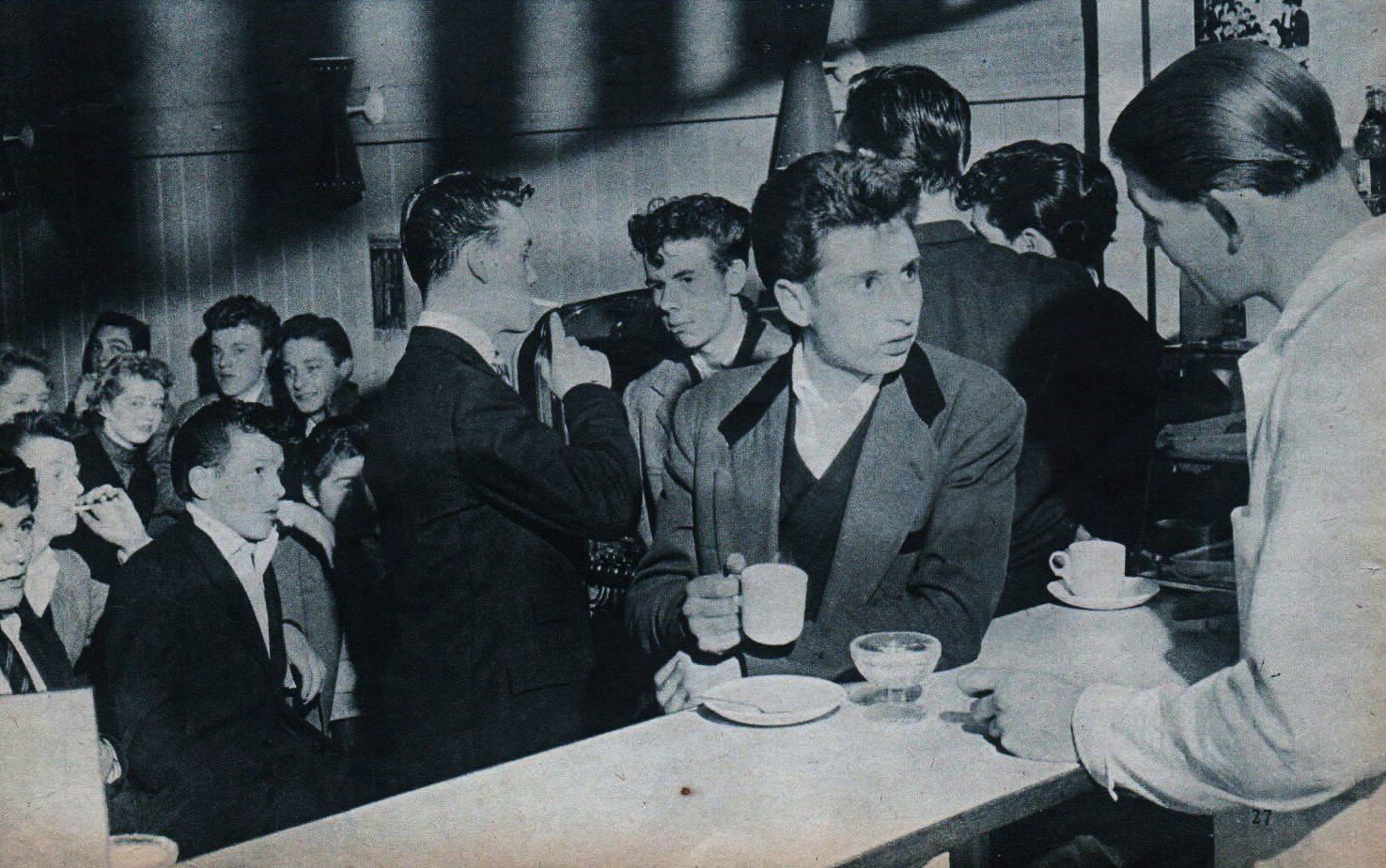