Memories of Central London's most famous Teddy Boy Pub during the early to mid 1970's. 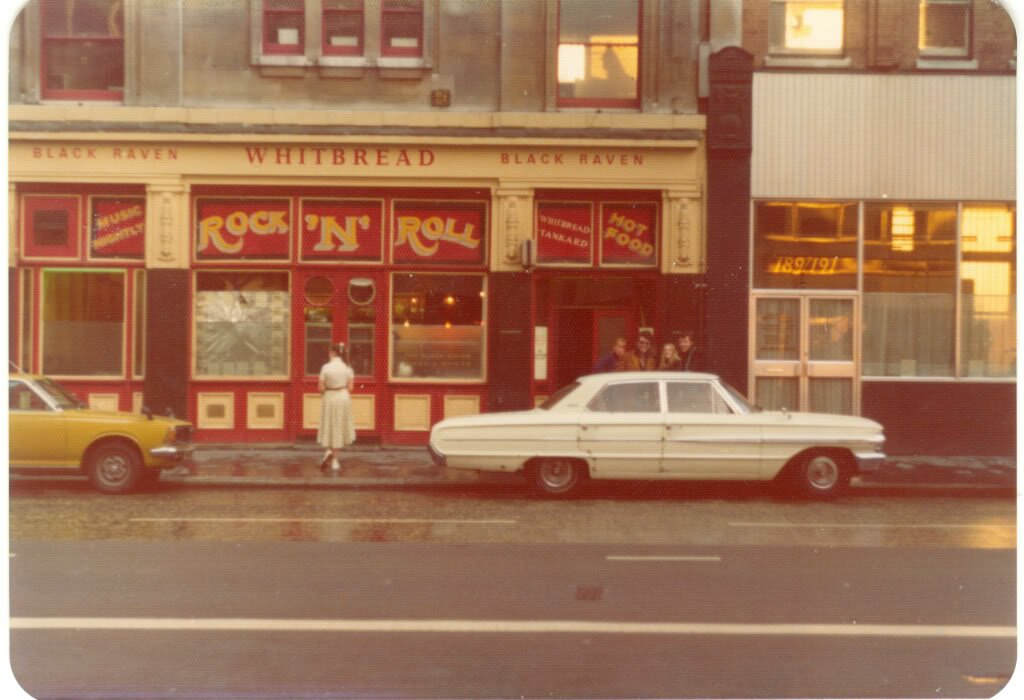 The Legendary Black Raven Pub in London during the early to mid 1970's with 'King of the Teds', Sunglasses Ron Staples & Gang.

Some of the original Black Raven Teds inside the pub in 1969 with Bob Plumb (Blue Drape) and Vic Hunt (Beige Drape). Prior to Sunglasses Ron coming onto the scene.

Thousands of Teddy Boys and Teddy Girls came and drank, danced, got drunk, fell in love and lived the Rock and Roll lifestyle at the Raven. From humble beginnings with only half-a-dozen or so young Teddy Boys it began. The word spread and more came. They came from near and far. Eventually the Black Raven attracted the youth from across the waters - who returned to their foreign homes and spread the word. For the second time in history the seeds were sown.

At the Black Raven pub in Bishopsgate, on Friday nights, it's as if the 1960's had never been. The bar is filled with men, most of them around the age of 30, wearing the classic costume of the historic Teddy Boys: drapes, crepes and bootlace ties. Deafening music from the juke-box insists on the simple beat of early rock 'n' roll. The dancing preserves the athletic tradition of American jive. A chance client might think that some time machine had transported him 15 years back into the past. But the proprietor, Bob Acland, would assure him that he had stepped into the immediate future. "We don't aim to sort of turn the clock back for people who've had hard, unhappy times. The Teds aren't a broken army, all gone down a hole like rats. Why, even Princess Anne went to a rock concert with Nixon's daughter. You can't revive what's never been dead. 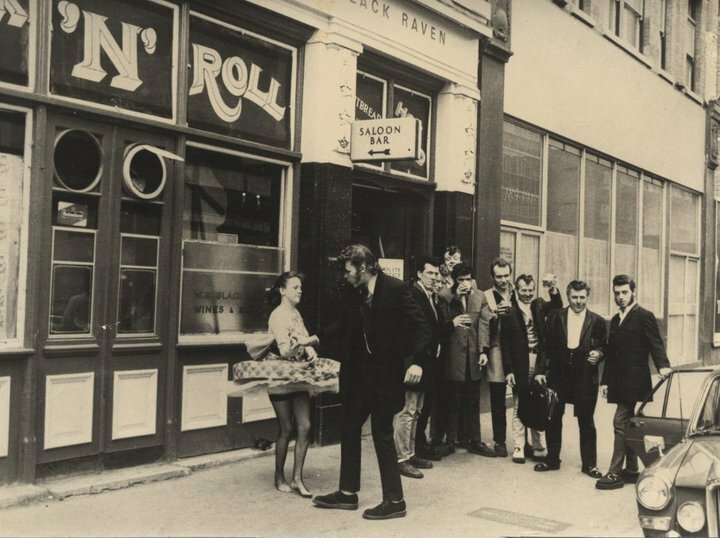 "I come from Paddington. Had a greengrocery store, my mother did, and I drove a lorry for her. I ran a rock club in 1958. After that I was a driver for Lady Pulbrook in Belgravia - she gave me a lovely watch from Harrods when I left, I'll show you. Then I drove for Lord Macpherson - he has an office near here in Old Street. I had a council flat round the back and I saw this pub and thought it had got potential. Three years ago I had a lucky win on the horses and I bought it. Lord Macpherson gave me a box of cigarettes and matches from the House of Lords: I've kept them ever since. He's always welcome if he wants to come here, him and Lady Macpherson.

"Nineteen fifty-six to fifty-eight was the great old days for real music. The Beatles and Stones was good at first, then they went out on a cloud. These type of old records will go on when The Who and that is dead and gone. That modern music, it's all the same, ain't it? Weak, like. Just for 16-year-olds. Commercial. Young people today haven't had the opportunity to hear what classical music is. I thought it was a shame to let it die, so I put a couple of records on for my own bunch. Half-a-dozen just happened to walk in, some of them was original Teds, some was the younger brothers of Teds who remembered the good old days. The word got round - I don't waste money advertising. They thought Hello, what's happening here? They told their friends about it and it spread. They introduced new blood - some of them was barely born in 1955. This music, it gets into your blood. They catch the fever, like. People who didn't even think they liked it start tapping their feet.

Former Black Raven Teddy Boy, Martin Hales states "We were all Friday Raven regulars 1970/1973 (Fishmongers Arms Saturdays) It was me who sold Ron his first drape (burgundy colour) and who nicknamed him Sunglasses Ron. We first met in a pub in Waltham Abbey, there were two Rons, hence Sunglasses Ron to differentiate between the two. Took him with us one Friday night and introduced him to the Raven. We were Black Raven regulars, myself, Martin Hale, Stewart Hale, John Wheatley, Richard Stratton, Robert Piechulla, Carol Darrington (now Piechulla). I used to have a large Austin J2 van parked outside and often would give a lift to around a dozen passengers back through north/east London. Was at Brighton when we all went down from the Raven, non of us expecting what eventually kicked off.."

I got two or three thousand records now. Chap from France brings over the new rock 'n' roll records we can't get here - it's always kept going over there. Some chaps come 40 miles on a Friday night. I hit the right note, you see - and now I'm getting the right notes, crinkly ones! A lot of people now are trying to take credit that they revived it, but it all started here, in the heart of the City of London. 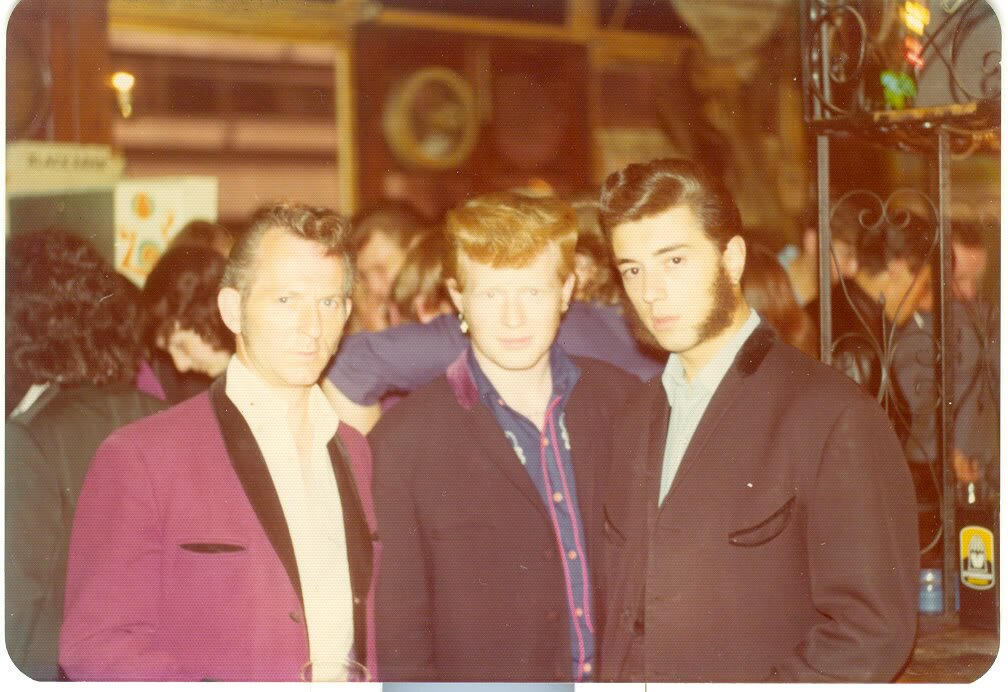 "Tell you one of the greatest artists ever - Al Jolson. It all started with him. We've got Glenn Miller here too. We offer a service - you can't get them anywhere else.

These artists are deceased - Buddy Holly, he's gone. Any stars who died in tragic circumstances, like car crashes, we always give them a three-minute silence on the anniversary of their death. Everybody obeys it.

"I spend £6 a week on records and I hire a juke-box - it's better than a group. The Top Twenty is obsolete in this pub: most of it's a load of rubbish. I've had six brand-new juke-boxes in three years - they're worth about £700 each, it wouldn't pay me to buy one. Dancing gets a thirst up - without that juke-box I'm a dead duck. Got an IQ machine as well: we're not just pretty faces, you know."

I tried the IQ machine, but I think it must have been out of order. It asked me who wrote Paradise Lost - John Milton, John Osborne, Shakespeare or Margaret Mitchell? I chose Milton, and the machine told me my answer was incorrect. There was nothing wrong with the juke-box, however. Here the choice embraced Presley, Bill Haley, Little Richard, Cliff Richard, Ricky Nelson, Eddie Cochran, Connie Francis, Nancy Whiskey, Bobby Darin, Paul Anka, and many other vintage names, including an obscure record which happens to be Acland's favourite: Janet Richmond singing Not One Minute More. 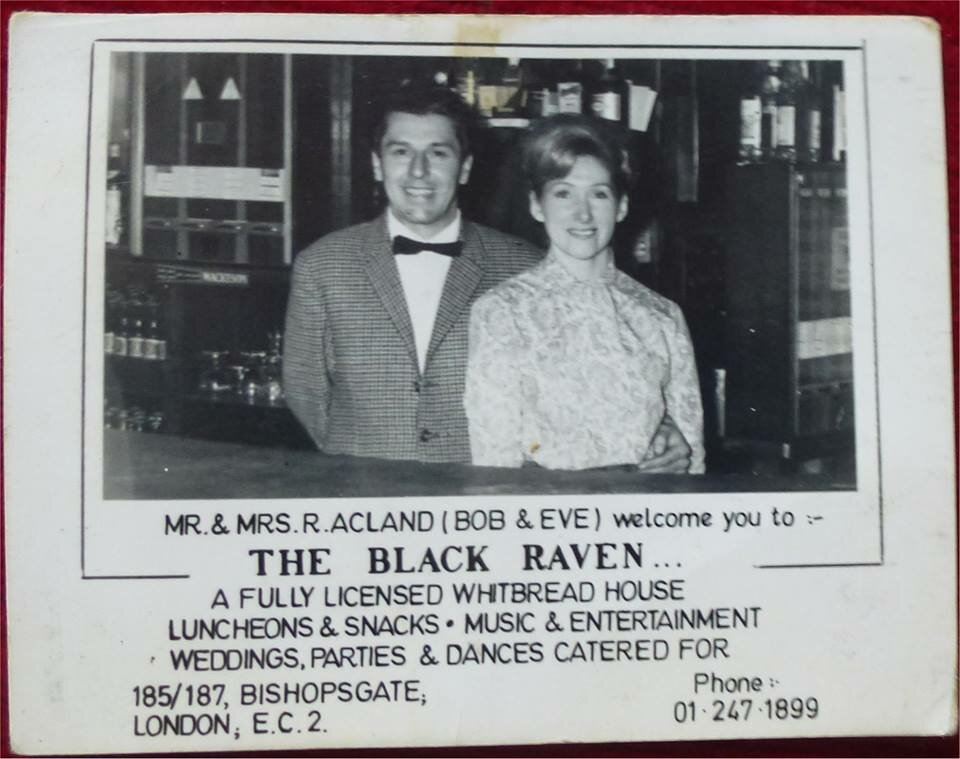 "The Black Raven is now legend and all those that used to frequent the establishment will never, ever forget the Raven, as long as they have breath in their bodies.....and maybe even after!" - Ray Flight. 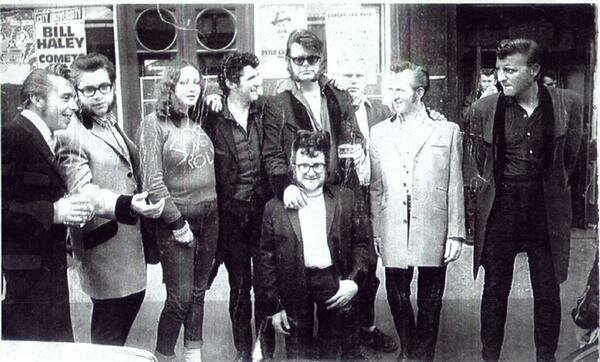 "Sunglasses" Ron Staples with Alan "Hard Luck" Ross on his right and Ken Kilby on his left in the smart light coloured drape. In front of him is "Tongue Tied" Danny Cheek.

After the Black Raven Pub closed on 16th August 1975, many Black Raven regulars moved to the Pembury Tavern in Hackney where upstairs the 'Black Raven' Club was established.