Let Him Have It - the story of Christopher Craig and Derek Bentley. This is one of the most famous stories of the 1950's which involved two teenage boys, Christopher Craig and Derek Bentley. Derek had previously kept himself to himself until he got involved with a group of hoodlums and one in particular, namely Christopher Craig. Derek had obtained a 2 piece blue two piece drape suit from the leader of the hoodlums and from that point onwards had adopted the Teddy Boy look with Derek wearing by contrast, a Chicago gangster appearance.

Derek Bentley looking much older than his 19 years.

As a child Derek Bentley lived in Blackfriars and his home was bombed in the Blitz. Derek received head injuries and was also epileptic and illiterate. He found it hard to make friends and was bullied at school. When Christopher Craig began to take an interest in him, Derek became infatuated. He would do everything Chris told him to do. 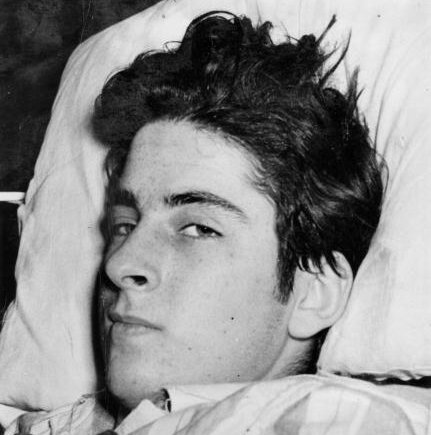 Christopher Craig after the bungled break-in at Barlow & Parker's Warehouse in Croydon.

Christopher Craig was 16 and spent his time watching crime movies and reading crime comics. In his mind he was an American hoodlum. By contrast Derek Bentley was aged 18 but had a mental age of around 8 years old.

On 2 November 1952, the two teenage boys, Christopher Craig and Derek Bentley tried to burgle the warehouse of the Barlow & Parker confectionery company at 27-29 Tamworth Road, Croydon. Christopher Craig armed himself with a Colt New Service .455 Webley calibre revolver, of which he had shortened the barrel so that it could be easily carried in his pocket.  Craig also carried a number of undersized rounds for the revolver, some of which he had modified by hand to fit the gun. Derek Bentley by contrast carried a sheath knife and a spiked knuckle-duster, both of which Craig had given to Bentley.

They were both extremely inept criminals. Their attempt to rob the factory warehouse was thwarted as around 9.15pm, a nine-year-old girl in a house across the road spotted both Craig and Bentley climbing over the gate and up a drainpipe to the roof of the warehouse. She alerted her mother, who called the police.

When the police arrived, the two youths hid behind the lift-housing. Craig taunted the police. One of the police officers, Detective Sergeant Frederick Fairfax, climbed the drainpipe onto the roof and grabbed hold of Bentley.

Bentley broke free of Fairfax's grasp. What happened then is a matter of controversy: police witnesses later claimed that the police officer asked Craig to "Hand over the gun, lad" and Bentley shouted the ambiguous phrase "Let him have it, Chris" to Craig. Craig fired his revolver at Fairfax, striking him in the shoulder. Despite his injury, Fairfax was again able to restrain Bentley. Bentley told Fairfax that Craig was armed with a revolver and had further ammunition for the gun. Bentley had not used either of the weapons which he had in his pockets.

A group of uniformed police officers arrived and were sent onto the roof. The first to reach the roof was Police Constable Sidney Miles, who was immediately killed by a shot to the head. After exhausting his ammunition and being cornered, Craig jumped around 30 feet (10 metres) from the roof onto a greenhouse, fracturing his spine and left wrist.

PC Miles was a cop of the "Dixon of Dock Green" mould. "Now come on, son. Don't be silly. Hand that over," he said. But Chris shot him, hitting him in the head and killing him instantly.

Here was the crux of the prosecution case against Derek: it was alleged he shouted "Give it to him, Chris. Let him have it." The prosecution said this meant "shoot PC Miles". Bentley's defence said it meant "let him have the gun, hand it over to him.

Another policemen was still climbing the ladder to the roof. He was never called to give evidence and said to the best of his knowledge, Derek did not say anything at all. Meanwhile Chris tried to escape by jumping from the roof, but broke his neck and was confined to a wheelchair for some time afterwards.

The right wing press had been getting into a lather for some time about "juvenile delinquents" and "Teddy Boys". The home secretary at the  time was a Tory named Sir David Maxwell-Fyffe. He put pressure on the court to deal with the case quickly (while the incident was still in the public mind) and as harshly as possible.

Derek was examined by two court appointed psychiatrists. One found him illiterate and borderline "retarded", concluding that he should not stand trial. But the other said he was not suffering from epilepsy at the time of the shooting and was therefore fit to stand.

One of Derek's former teachers later became a child behavioural psychologist. He said that at school playground fights, Derek had been "a coward" - and that therefore "let him have it" did indeed mean "give up, don't shoot the gun".

But the second psychiatrist's view became the accepted one. Chris and Derek stood trial on 9 December at the Old Bailey before Lord Goddard. The jury were never told of Derek's medical conditions and material witnesses who could have strengthened his defence were never called.

David Yallop was Chris's defence barrister and tells the tale in his book To Encourage Others. Derek was assigned a barrister convinced of his guilt. "I think the little bastard should hang, don't you," he told Yallop.

Lord Goddard got his rocks off when sentencing young men to hang. His clerk always had a spare pair of trousers ready in his chambers on days when this sort of sentencing took place. Yallop meanwhile was later disbarred for being too much of a thorn in the side of the legal establishment.

Derek Bentley was convicted as a party to the murder, by the English law principle of common criminal purpose "joint enterprise". Lord Chief Justice Goddard sentenced Derek Bentley to death based on an interpretation of the phrase "Let him have it" (Bentley's alleged instruction to Craig), describing Derek Bentley as "mentally aiding the murder of Police Constable Sidney Miles".

The jury found Derek guilty of encouraging murder, but recommended mercy. That recommendation was ignored by Goddard who sentenced Derek to hang at Wandsworth Prison.

This was postponed to allow an appeal. Derek's legal team found several anomalies in the ballistic evidence. Chris's gun was extremely inaccurate after six feet, the calibre of the bullets was in question and the fatal bullet was never found. PC Miles could well have been shot by one of the other police officers and not by Christopher at all.

The appeal was dismissed and the execution was rescheduled for 28 January 1953. Sydney Silverman, a Labour MP, had been campaigning for some time to abolish the death penalty. He raised a petition of over 200 MPs calling for Maxwell-Fyffe to commute the sentence. Fyffe refused.

On the morning of execution a crowd of around 300 gathered outside the prison to oppose capital punishment. They marched to the home office and on to Downing Street.

In 1991 the Home Office re-opened the case under Home Secretary Kenneth Clarke, however despite all the evidence put forward to the Home Secretary, this came to nothing.

In 1993 Iris had a breakthrough. The then, Labour shadow Home Secretary, Tony Blair, put pressure on his then Tory counterpart Michael Howard, who gave Derek a partial pardon. He said that Derek should never have been hanged, but still felt he was guilty of incitement to murder.

Christopher Craig who was interviewed in an ITV Thames Television programme in 1993 said that the Police had fabricated the story that Derek Bentley had ever said "Give it to him, Chris. Let him have it.".  He was also given a lie detector test and this proved that Chistopher Craig was telling the truth that Derek Bentley never uttered those words.  Therefore this proved beyond all reasonable doubt that there had been a severe miscarriage of justice.

Iris kept on fighting, although seriously ill with cancer. She died in 1998, a few months before Derek was given a full pardon. His remains were removed from Wandsworth, where hanged prisoners were buried, to be placed next to his father and sister.

Two key points to note is that Derek Bentley was working class and therefore did not have the protection of establishment figures and friends in high places and furthermore the Police had colluded in their statements.

Due to the public revulsion over this case and that of Ruth Ellis in 1957 no further capital punishments were carried out in Britain after 1964. Three years later the death penalty was removed in Britain, although it remained as an option for governments to restore until the late 1990s, when Home Secretary, Jack Straw acting on an EU edict abolished it completely.  Between 1967 and 1998 you could still be executed for setting fire to a naval dockyard.

In 1991 a movie was released called "Let Him Have It", staring Christopher Eccleston as Derek Bentley and Paul Reynolds as Christopher Craig, relates the story.