This is an excellent article written by Mark Kozlowski, one of the original members of the Edwardain Drape Society who discusses the state of the Teddy Boy scene in the late 1980's. early 1990's and why he became an Edwardian Teddy Boy. He goes on to discuss his memories of the begining of T.E.D.S. back in 1992 at the Empress of Russia pub in Islington, London. 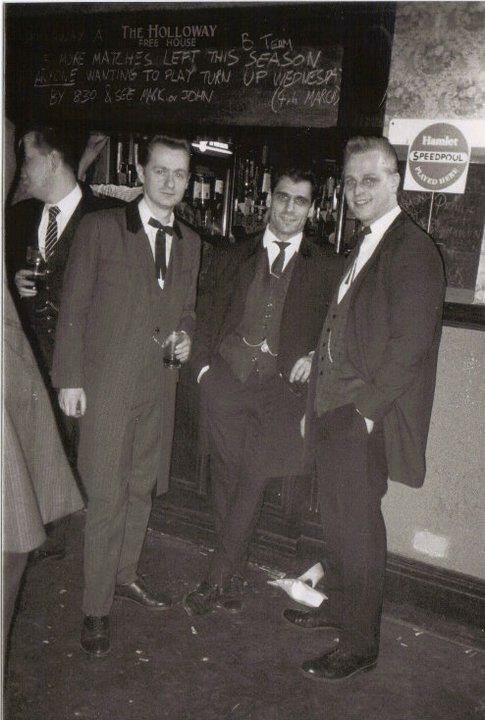 T.E.D.S.members, Steve Cranmer, Pete and Mark Kozlowski at a TEDS Do in the Holloway Tavern in 1992.

Memories of the Beginning of T.E.D.S.

I have very vivid memories of attending the first T.E.D.S. events, and of the times that had spawned them.  Having been introduced to Rock'n'Roll by a friend back in the mid-1970s, I had been so intrigued by a photo of a Teddy Boy on a cassette cover that I decided I wanted to be one.  I was only ten at the time, and it took me another ten years, but by the mid-1980s I was proudly wearing drapes and regularly going to Rock'n'Roll clubs around London and the South East.

To be a Teddy Boy in the mid to late 1980's meant bucking several trends.  Leaving aside the obvious rejection of the mainstream music and fashions of the day, the Teds of that period were also swimming against the current on the contemporary Rock'n'Roll scene.  It was a very different situation to that of the previous decade.  From the late 1960's until the late 1970's, the Rock'n'Roll scene had been dominated by the 'Ted' style, ethos and identity, along with that of the early 1960's style British Rocker.  To an outsider, it may have seemed that the status quo of a scene that was so reverential to past glories was unlikely to ever change, but the late 1970's saw a major rift appear.  The name of that rift was Rockabilly.

"Rockabilly" was a musical term that first appeared in the American music press in the mid-1950's, which continued to apply it - quite liberally - to almost any record with a lively beat.  On the Rock'n'Roll scene, the term had first become known to record-collecting Teds via the postally-circulated sales list of pioneers like 'Breathless' Dan Coffey, a Welsh Ted who had travelled to America in the late 1960s to purchase unsold original singles produced by several American independent labels in the 1950's.  It was through these sales lists that British Teds began to absorb and acquire records which, ten or fifteen years later, would be acknowledged as Rockabilly classics.  But for the Teds that collected them, these records were simply prime examples of kick-ass Rock'n'Roll.  Little could they have imagined that the same records would become the foundation of a scene that would adopt an anti-Ted stance and cause many 1970's Teds to abandon the club scene.

Alongside the burgeoning Rockabilly movement that sprang from within the established  Rock'n'Roll scene, the media enthusiasm for a brand new genre called "Rockabilly" meant that the Teds had to contend with trend-conscious young pop fans taking an interest in what had previously been a lively if neglected backwater.  These fans, many of whom were sailing on the dying wave of the Punk explosion, had little empathy with the Teds.  Indeed, as anyone from either faction who was around at the time will remember, great play was made in the media of the Punk-Ted battles that raged along the Kings Road in Chelsea between 1976 and 1978.  When ex-Punks joined the Rockabilly movement of the early 1980's, there was little love lost between them and the Teds.  For the Teds, who had circled their tribal wagons and fought off Punk attackers from outside their scene, a fresh assault from within their own camp was the last straw.  How else could they feel, when they were presented with young Rockabillies sporting sideburns dyed pink?  Something, somewhere, was going very wrong.  What had happened to the values that held the scene together for such a long time?  The Teds began to lose steam, their numbers dwindling around London clubs at the same time as the numbers of younger Rockabillies grew exponentially.  And so it continued until, by the late 1980's, there were almost no Teds to be seen in London.

On top of that, the style itself had been crucified in the media over the past decade.  Showaddywaddy had all but destroyed the credibility of the clothes at street level, and comedians like Freddie Starr and Russ Abbott had played the look for laughs.  It was only a diehard few, whose vision was based on what the style had been in its heyday, who continued to burn a flame for it.  Even the most optimistic among'st them would have had a hard time denying the fact that 'Ted', whether as a style or movement, was truly in the doldrums.  And it was this sorry state of affairs that spurred Susie and Dixie to try and change things.

The efforts they made may be hard to appreciate in this internet age, where a quick Google search can answer almost any question, but back when T.E.D.S. was formed, cult scenes were reliant on leaflets, word of mouth, and the telephone to build and maintain themselves.  And so it was that I was handed the first introductory flyer about T.E.D.S. at a Rock'n'Roll weekender in the early 1990's.  The flyer lamented the state that the scene had descended into, but insisted that all was not lost.  Salvation, it suggested, lay in the hands of the Teds themselves, who could make an effort, dress up to the nines, and show the rest of the world what the style could be when it was done well and with commitment.

The flyer echoed many of my own feelings at the time.  In company with a few friends, and inspired by some guys from Essex that we had got to know, our style of dress had developed into a conscious effort to recreate the look of the early Teddy Boys, circa 1954, when the 'New Edwardians' had resembled Beau Brummel rather than Showaddywaddy.  Our drapes, while never bright or gaudy to begin with, had grown darker.  Highly polished Oxford shoes had replaced brothel creepers.  Pomade and various American brands of hair grease had replaced hairspray.  It was a deliberate attempt to move away from the image of the Teddy Boy as presented on Saturday evening variety shows, to return the style to its widely neglected roots.  And - frankly - it was simply damn good fun to dress that way!

Intrigued as I was by the T.E.D.S. flyer, I wondered how successful this attempt to gather the faithful would be, as I had only managed to get a maximum of eight original-style Teds together in the late 1980's.  So it was an amazing and pleasant surprise to arrive at a room above The Empress of Russia pub in 1992 and find around fifty or sixty immaculately-dressed Teds already there!  I had never seen so many well-dressed Teds in one place at one time, which was a testament to the amount of time and effort that Susie and Dixie had put into spreading the word.  The others there felt the same as me; everyone was pleased and surprised by the turnout.  Many new friendships were born in the lively discussions that took place, but bringing everyone together like that achieved something more.  It showed everyone present that the enthusiasm for the original Ted style was developing into a small, niche movement of its own.  Or maybe it had always been that, and we just hadn't realised it because we had never been gathered together in one spot before!

Whatever the case, the following T.E.D.S. evening was even better attended, and the increase in numbers continued with each successive event.  Optimism about having found a way forward for the style had replaced the bloody-minded refusal to roll over and die that had sustained the Teds for the past few years.  And for that rejuvenation and re-energising, much credit must be given to Susie and Dixie.  Without the T.E.D.S. meetings, and the concept that lay behind them, we would undoubtedly have remained as small, scattered groups of enthusiasts.

There were some in the early days who perceived elitism and snooty exclusivity in the insistence on 'dressing up' for T.E.D.S. evenings.  Wasn't it enough, ran the thinking, that someone had worn a drape back in the 1970s?  Why couldn't a person turn up in a denim jacket and trainers?  This, sadly, was missing the point of the T.E.D.S. nights by a mile.  Susie and Dixie were not just running a get-together for Rock'n'Roll fans; there were plenty of those being run at the time in London.  The point of T.E.D.S. was that it was about the style itself, and to celebrate that style by wearing it.  And the fact that the movement that was spawned in those get-togethers is still in existence more than twenty years later is surely proof that the original concept was sound.  And since those formative years, enthusiasm for the early Teddy Boy look has now spread around the world, much aided by the internet.  Oh, what Susie and Dixie would have given for a good website back in 1992 - today, The Empress of Russia pub, tomorrow, the world!  Ah, such happy memories…