Father Teds was an article written by photographer, Chris Steele Perkins that appeared in the Observer Newspaper on Sunday 26th January 2003.

For some Teddy Boys, rock and roll will never die. Almost 25 years after his cult book The Teds was first published, photographer Chris Steele-Perkins revisits some of his old haunts and finds that 'Fingers' Lee, Tongue-Tied Danny and Fifties Flash still ha't grown out of their greasy DAs and drape coats. 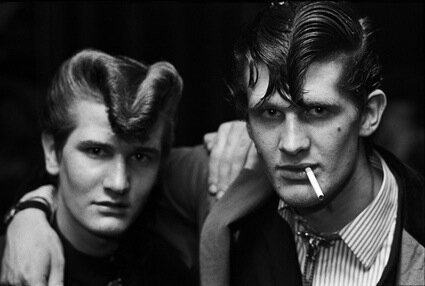 For some Teddy Boys, rock and roll will never die. Almost 25 years after his cult book The Teds was first published, photographer Chris Steele-Perkins revisits some of his old haunts and finds that 'Fingers' Lee, Tongue-Tied Danny and Fifties Flash still haven't grown out of their greasy DAs and drape coats.

'In early 1954, on a late train from Southend, someone pulled the communication cord. The train ground to a halt. Light bulbs were smashed. Police arrested a gang dressed in Edwardian suits. In April, two gangs, also dressed Edwardian-style, met after a dance. They were ready for action: bricks and sand-filled socks were used - 55 youths were taken in for questioning. The following August Bank Holiday the first Best-Dressed Ted contest was held. The winner was a 20-year-old greengrocer's assistant. The Teddy Boy myth was born...'

The Teddy Boys were the first mass expression of British youth culture: a tribal clique determined to strut, threaten, amaze, entertain and finally define the aspirations and imagination of working-class youth in post-war Britain. Many others would follow: Mods, Punks, Skins, Hippies, Goths and - like the Teds - they would blend music, dress, hair, slang and attitude in a unique, creative subculture. But none could rival the place in history of the Teds who, with their outrageous style, rebellious attitude and violent behaviour, became the first teenage embodiment of dread to all decent right-thinking citizens.

It is hard to imagine how radical Teds were when they first appeared in the conventional, austere, post-war 50s. They revelled in hairstyles borrowed from American rock and film stars and exaggerated music from the new, loud, sexual rock'n'roll. They sported velvet-cuffed drape coats which were copied from the high Edwardian style (hence the Teddy), tight trousers, and an attitude magnified by British truculence. And their shoes were from... Mars!

Certainly my father, the most conservative of men, considered Teds to be beyond the pale, threatening that I didn't want to turn out like one of them. But I sort of did. I was too young and too scared of them then, but I did cultivate a Brylcreme quiff and I bought a pair of winkle-pickers, which my father threw in the fire. And that was more or less that.

Or it was, until the 70s when I was asked to photograph the Teddy Boy revival for New Society magazine. I teamed up with my friend and writer, Richard Smith, and both of us were intrigued by what we found - the energy, the style, the kitsch, the buzz, the hedonistic fuck-you-ness of it all. And the music was good - not cutting edge, but good. A night out with the Teds was generally a good crack - sometimes some violence, some vomit on the carpet, but generally a rock'n'roll party. I wasn't a Ted, but it was easy enough to fit in. I was the bloke who took photographs.

The book of the work we did came out in 1979. It was called The Teds and it became a bit of a cult. The book has recently been republished and looking at it again, my curiosity got the better of me. I decided to go back and find some of the characters who were in the book. It was almost like going to a school reunion - 'Whatever happened to...'

I went down to a Teddy Boy weekender in Reading. I didn't realise these things still went on, but I was told by some of the Teds that there were too many of these kinds of events now, that the scene was getting diluted. It was certainly getting old.

I tracked down Tongue-Tied Danny through Val, who had organised the event. When I did the book, he was one of the best-known DJs, in demand around the country, and I photographed his wedding to Sue, 24 years ago. 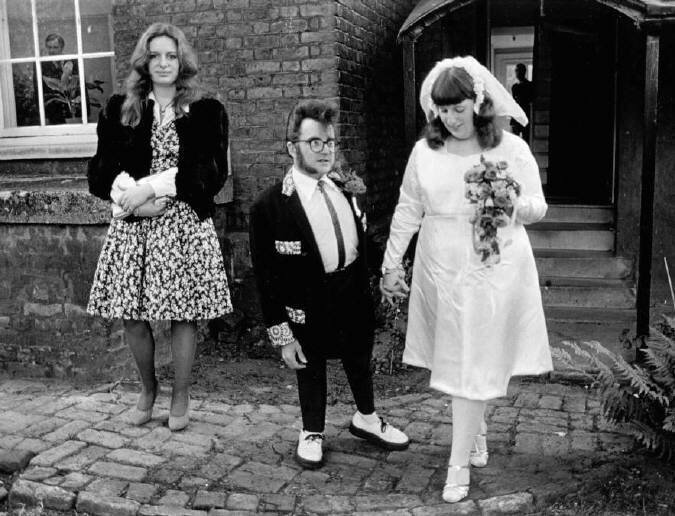 Danny had been out of the scene for many years. He'd got fed up with it, his equipment was always being stolen, his car trashed, he'd had enough. He moved into historical re-enactments and building computers. But the pull of the Ted was too strong, and through some old friends he gradually got back into it.

Nowadays, Danny has to use a walking stick and Sue is permanently in a wheelchair and often in great pain (but still active in her residents' association). She collects porcelain dolls. Danny still gets down to the Galleon pub and the Pavilion in Battersea for rock'n'roll nights.

I arrange to meet him later on in the Galleon, where he tells me I might find some of the people who were in the book. Outside the pub, a group of kids are hanging about in the street - kids the age of the Teds I had once photographed in the 70s. This lot are busy throwing fireworks at each other.

When I go in, DJ Tom Hogan is playing music. He is a die-hard Ted. 'I made a vow to myself that I would remain a Ted all my life, and when I go to collect my first pension cheque in a couple of years' time, I'm going down the post office in my drape. The full Ted gear. I promise you.' Tom's there with his family. His 19-year-old granddaughter Dionne does a neat bit of jiving, pairing with her gran.

A group of us are sitting at a table with Danny, when one of our company says that he was in the book, twice. I look at him but can't place him. 'You know, that picture you took of us pissing on the coach trip at the end of the book?' 'Yes, of course.' 'Well, that's me. I'm the one with the biggest knob.' In the book, he's also featured leaning tenderly over towards one of the prettiest Ted girls - young love. He's Geordie Bill.

I go through the book with them. 'Never see him any more... He's dead... Flash, yes, he's bald now... He's dead now, crazy, mad. Drank. Died of a perforated ulcer... Yeah, seen him, Stan the Man, he's about... Ah, Ron, he died, you know, 5,000 at his funeral, Hell's Angels as outriders, the police let them ride without helmets. You know he had an equity card... Freddy's around, still plays piano, now lights a fire on his head.' A lot of dead Teds. 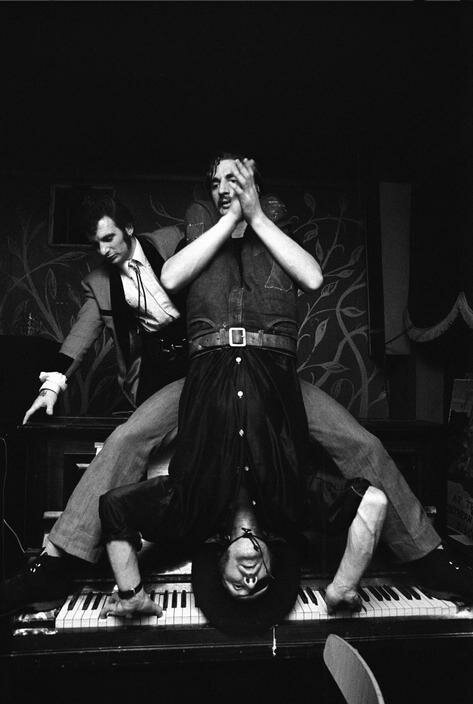 Freddy 'Fingers' Lee lives in Consett. He is still popular on the continent and has just come back from a gig in Barcelona, but he's got no bookings in the UK, except one for charity. A pity, because he is a tremendous piano player and entertainer. He is planning to retire in a couple of years, but for now he still records his new songs in the Old Miner's Hall, which has been converted into a modern sound studio, and then sells his CDs directly through the rock'n'roll press.

These days, John Morris prefers leather, but there is no escaping the quiff. When I first photographed him, and wrongly identified him as Studs, he was 14 and had the most enormous tubular quiff horning out of the front of his head. Now it has thinned a lot, but the spirit remains. He isn't a die-hard Ted, but he is still on the margins of the scene. John worked for years on Camden market as a street trader, but has now moved up and, with his wife Arden, runs Stitch Up, a 50s-flavoured boutique in Camden.

Jailhouse John has stopped being a Ted and now has a good job as a BT systems manager. He used to operate with the Wild Wax Show as a DJ, but those days have long gone. Now portly and managerial, he seems a bit defensive when I remark that he is the only Ted from the time of my book that I have tracked down who is not still a Ted. 'Well,' he says in response, 'I still like the music.' 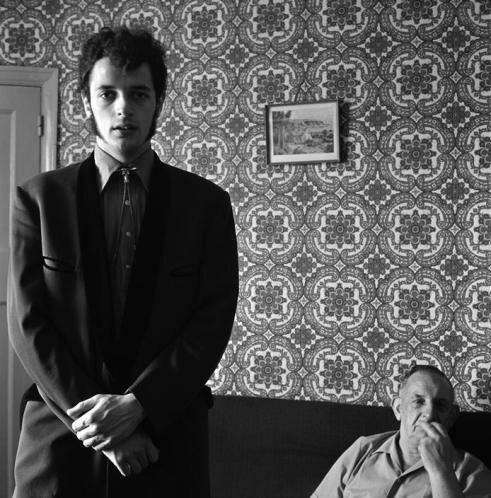 “Even if I were to stop buying Charlie Feathers and Warren Smith records I would still not be able to become part of the ‘new wave’ scene” wrote Jailhouse Johnny in a letter to Sounds. At home with his father 1976

The Teddy Boy weekender had been my first encounter with the Teds for more than 20 years and I left feeling sad. Feeling it was a sad event for sad people lost in time. When I re-immersed myself more deeply in the scene, I soon realised that I was wrong. They weren't sad, they were enjoying themselves, having a good time. They were doing their thing, not afraid to be who they wanted to be. Being a Ted had been one of the defining experiences of these people's lives. Now some were responsible fathers or grandfathers, still carrying a flame, determined to go on, like Tom, marching towards being a pensioner, defiantly draped.

They form a strange kind of community, but it had been that strange community which first fascinated me all those years ago. They have held on to something that was important to them. Kept faith. Those markers that once quickened our youth can still drive our dotage.

So, we move on, the planets turn, we change, grow older and remain more resolutely the same. I still take photographs.  Long live rock'n'roll. 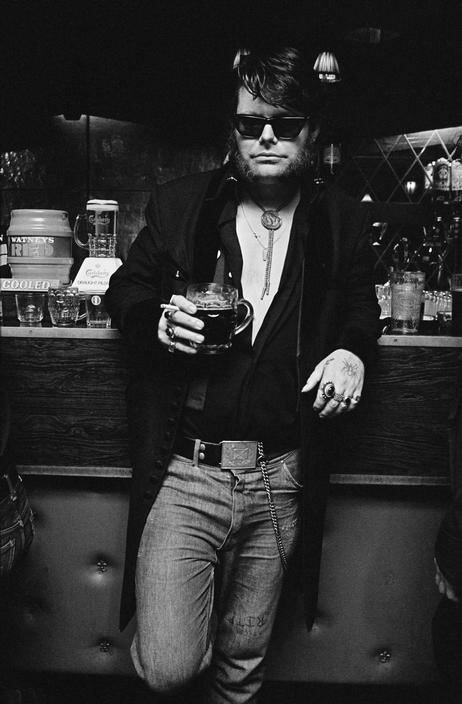 Sunglasses Ron, self-appointed King of the Teds, 1976. Described in US rockabilly circles as 'President of the Confederate States of America in exile. An archivist, administrator, rebel and veteran of the first post-war teenage cult'.